Inspired by the compelling and disturbing images of the Deepwater Horizon catastrophe in the Gulf of Mexico and the Upper Big Branch mine disaster in West Virginia. Full of rage and grief, it is reflection on modern society’s dependence on power from fossil fuels and what we are willing to sacrifice to keep using them.

To Pay by Check or with Purchase Order, Click Here for Order Form

Commissioned for the 2010 Byron Gjerde Memorial Choir Festival, “Sacrifice” was inspired by the compelling and disturbing images of the Deepwater Horizon catastrophe in the Gulf of Mexico and the Upper Big Branch mine disaster in West Virginia. These were 2010’s most visible examples but certainly not the last in a long list of man-made disasters in pursuit of oil and coal. It is full of rage, grief, and despair, a reflection on modern society’s dependence on power from fossil fuels and the cost in environmental destruction and the lives of miners and oil rig workers. It is about the power they give us, and the power we surrender to them and to the amazing machinery we have invented, machinery that is integral to modern society. “The ancient bodies, the ancient blood”— what is oil and coal, physically? We have tapped into that power, that enormous power, but at what cost? Do we have, as a species, the wisdom and ability to manage our destiny, or have we already gone too far? This lyric represents the darkest, most pessimistic view, our fears rather than our hopes. The music is intense, dark, with a heavy, driving rhythmic structure featuring a large percussion section.

This piece is best done with a large chorus. No matter what the size of the chorus, the percussion should not overpower the singers.
The tempo should be rock steady throughout. These words are more like a heavy metal lyric than a poem, they should be spit out clearly and forcefully, no matter what the dynamic level.
“The blood and the bodies”– as the pitch gets less and less discernable, the words should still be clear.

We level the mountains, burn the sea,
behead the hills, choke the valleys
to draw earth’s dark blood to worship these
gods we created to bend all the world to our will

We pour out our sacrifice
on the blazing pyre.

the bodies and the blood
the blood and the bodies 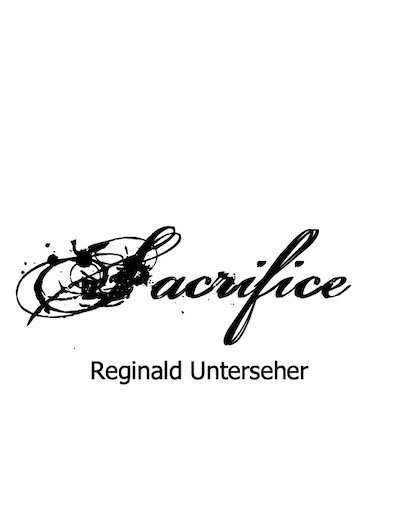